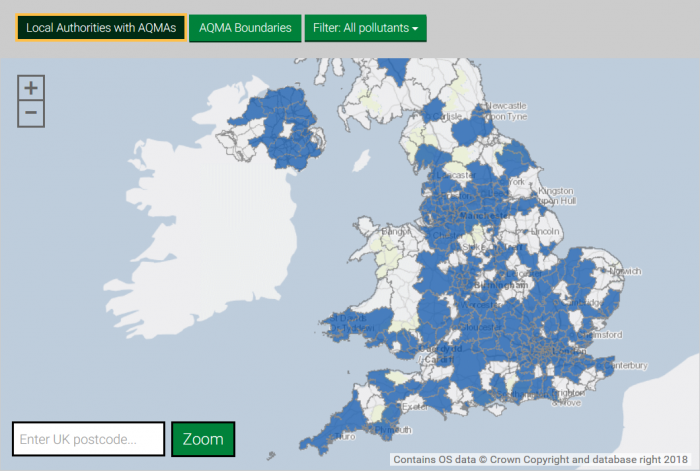 Comparing levels of nitrogen dioxide (NO2) – air pollution – the researchers found that cities such as London, Leeds and Doncaster were among the most polluted. But in addition to large cities, hundreds of smaller towns such as Biggleswade and Sawbridgeworth were also shown to be over the recommended safety limits for air pollution.

It’s estimated that as many as 36,000 deaths a year in the UK are linked with air pollution, costing the UK economy some £20 billion.

As well as death, toxic air can lead to numerous debilitating conditions such as asthma, heart disease, lung cancer and has even been shown to be a contributing factor for dementia.

“Across the UK there are thousands of locations over air quality limits, leaving millions of us breathing dangerously polluted air,” said Simon Bowens, a clean air campaigner from Friends of the Earth.

He continued, “Unacceptably toxic air can be found across much of the UK, even in smaller towns. It is harming the health of people across the country and is especially bad for young children whose lungs are still developing.”

While Nitrogen Dioxide is harmful, other forms of pollution are also extremely hazardous to health such as Ground Level Ozone and Particulate Matter.

But what can we do about it?

Government interventions, such as limiting the number of diesel cars on the road, will go some way to cutting down general air pollution; but will not cut it out completely.

The reality is, that in some situations Respiratory Protective Equipment (RPE) is the only thing keeping your lungs safe from harmful respiratory hazards.

Whether you’re cutting a kitchen worktop in a workshop, sifting flour in a mill or performing Aerosol Generating Procedures in a Hospital – RPE can be the last line of defense preventing your lungs from being filled with particulate matter that could lead to temporary ill-health, long term illness or even death.

For more information on RPE, airborne hazards and respiratory conditions, please get in touch with our RPE Experts on:
01933 672180
info@fullsupporthealthcare.com