The Real Story Behind the Broom Scandal 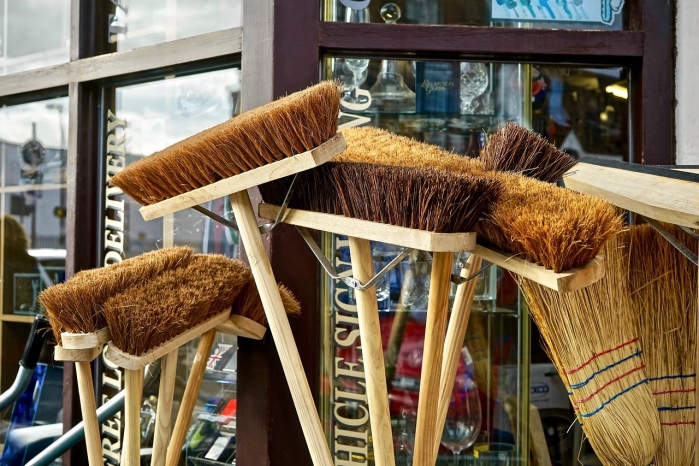 Last month the Health and Safety Executive (HSE) made the headlines in UK newspapers for warning a furniture maker not to dry sweep his workshop. Mr Northcroft, the recipient of the warning told the Sun Newspaper that it was “a load of rubbish” and labeled the request a “joke”.

But is this a case of health and safety gone mad? Or should we really think twice about sweeping?

Respiratory Hazards in the workplace

The fact of the matter is that around 12,000 people die from preventable occupational lung disease in the UK, every year. Thousands of which are caused by dust particles such as silica, asbestos and wood. In most cases, occupational exposure builds up over time causing life altering conditions 5 – 10 – 20 years down the line.

When concrete, brick, wood and other materials are sawn, cut, drilled or sanded hundreds-of-thousands of miniscule dust particles are released into the air.

While some dust you can see, it’s the dust you can’t that is the most dangerous. Tiny particles below 5 µm, invisible to the naked eye, can be inhaled, but are aren’t able to be exhaled again – left to build up in your lungs.

If inhaled, these fine dust particles can line the inner mucus layer of your lungs. When a person is over-exposed, or exposed over a prolonged period, these dusts can build up in their lungs causing irritation, scarring and numerous respiratory conditions including lung cancer.

The problem with broom sticks

When undertaking a task, such as drilling, grinding or machine sanding, most people know to wear RPE (respiratory protective equipment) because they can see the dust.

However, once the task is finished, fine dust can remain in the air for hours afterwards. Even after the dust has settled, any disturbance such as sweeping – or even walking – can bring the hazardous particles back into the environment, putting people at risk.

To minimise risk, RPE, local exhaust ventilation and powered extraction units, such as industrial vacuum cleaners, can be used to safely remove the particulate matter and keep employees safe.

Unlike powered suction devices that draw in the dust particles, brooms move particles from one place to another. While the larger shavings and off-cuts may not visibly be flung into the air, the hazardous non-visible particles are.

A thorough risk assessment should be able to assess whether or not sweeping is suitable, or whether other means of extraction should be employed. If powered vacuuming is not possible, suitable RPE may be required by the worker in order to prevent hazardous exposure when sweeping.

In response to Mr Northcroft, a spokesperson from the HSE said: “While it is simply not the case that HSE has banned the use of broomsticks, companies are being encouraged to use one of the many safer and more efficient types of equipment where the health of workers is better protected.”

While traditional means of dust removal, such as sweeping, have been used for thousands of years; in years gone by we did not have the knowledge or technology to deal with fine dusts effectively.

Today we understand that severe health issues can be caused through prolonged exposure to certain dusts and that hazardous substances in the workplace aren’t just the ones we can see.

In order to adequately protect our employees’ health, it is important to do everything we can to keep them safe. In fact, under the Health and Safety at Work Act 1974, it is an employer’s legal obligation to do everything they can to protect their workers’ health.

Yes, LEV, industrial vacuums and RPE is more expensive than a broom – but how much are your employees’ lives worth to you?

For more information about RPE and respiratory hazards, get in touch with our RPE Experts on:
info@fullsupporthealthcare.com | 01933 672180